When working with raw binary data (especially in security forensics), it is common to need to write parsers for this binary data. For example, extracting file contents out of the NTFS data structures on disk. For many common data structures, there are already binary parsers written for them that you can leverage, but you’ll still sometimes need to write your own.

BinShred is a PowerShell module that lets you do this.

BinShred uses a custom parsing language called a BinShred Template (.bst). Unlike the code-heavy templates used by things like 010 Editor, this grammar (implemented in ANTLR) is designed to be as close as possible to the language that people actually use when describing file formats informally. 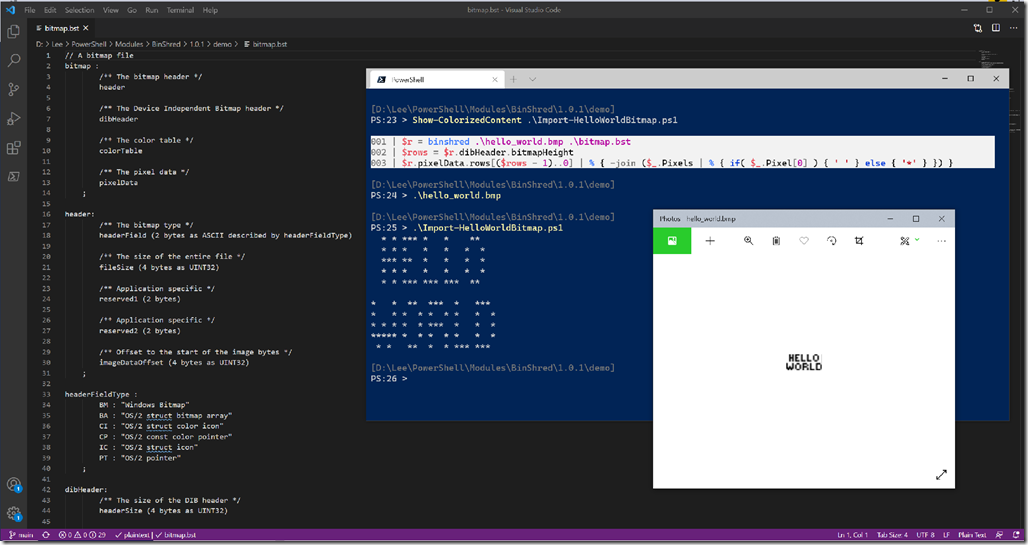 You can install it from the PowerShell Gallery:

For a full treatment of how to write these binary parsers, please see the included help topic. However, here’s a very simple example:

While BinShred is capable of processing fairly complicated binary formats (such as the BMP example above,) you will likely run into data structures that require much more advanced parsing logic. For these, be sure to check out Kaitai Struct (https://kaitai.io/)), which is a very robust binary parsing engine. While it does not support binary parsing via PowerShell, it is possible to compile file format parsers one-at-a-time into C# files, which you can then load into PowerShell and use.