A few minutes ago, Bob Muglia and Jeffrey Snover at IT Forum announced something at we’ve long been waiting for – the official Release to Web (RTW) of Windows PowerShell v1.0! 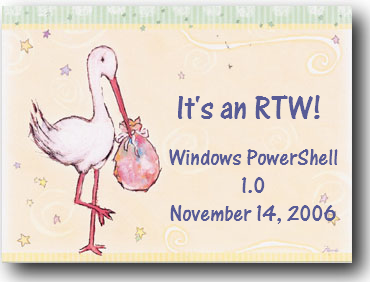 In late December of 2002, PowerShell entered the public eye when a Slashdot reader stumbled upon a job posting for “Microsoft’s Next Generation Shell”. About a year later, we officially announced the project (code-named “Monad”) at the 2003 Microsoft Professional Developer’s Conference. Things started to really pick up steam when we released our first really public preview in September of 2004 – a fact not missed by the ever vigilant Slashdot.

Since then, we’ve shipped incremental previews frequently, gaining enormous benefit from all of you – a passionate and active community of devoted beta enthusiasts:

Each release added features, fixed bugs, and incorporated heaps of changes initiated by feedback from the community.

This has been a long and adventurous journey – something that’s truly been worth relishing. Whether you are an old or new participant in the PowerShell community, you should feel proud of your contributions – and for a job well done.

You can find pointers to the official release at http://www.microsoft.com/powershell – so go install it, and enjoy the revolution!