First Solo - and a Ripped Shirt to Prove It

Last night, I flew my first half-hour as Pilot in Command of N8756C, a 1977 Piper Warrior. In flying, a pilot’s First Solo is a huge milestone. After hours of training and ground study, you finally take to the air on your own. 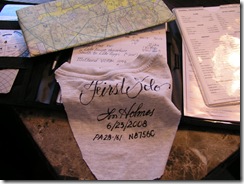 The most difficult part of flying is getting back down, so the First Solo is three takeoffs and landings – about half-an-hour in the traffic pattern. It seemed to be the flight that would never come, though.

We first planned our pre-solo flight for Thursday, followed by the solo on Sunday. The pre-solo flight is a comprehensive review, so we booked the airplane from 5 to 7 PM. When we went through our pre-flight checklist, we realized that none of the avionics were working: I could hear myself, but couldn’t speak with my instructor. We tried everything we could to resolve the problem (including accidentally enabling the Emergency Locator Transmitter / Distress Beacon,) but couldn’t fix it. Dejected, we re-parked the plane and returned to base. I later learned that the squelch on the radio was wrongly adjusted. The squelch control determines the signal strength required for transmission. It is normally used to suppress low-level static, but in this case was set to exclude almost everything.

With that flight aside, we re-booked for Sunday – this time for both the pre-solo and solo flight.

Sunday came around bright and sunny, as did our 6 PM flight time. We patiently waited for our plane to arrive back from a previous lesson, filling time with some ground work in the meantime. We planned a flight to Thun Field, with detours for maneuver practice and instrument flying. Then, we waited some more. And some more. The plane finally got back 75 minutes late, but we went out hoping to get at least part of the lesson done.

When we got to the plane for our pre-flight checklist, we of course found it bone-dry. The gas truck took seemed to take its sweet time, but the real kicker came as we prepared to taxi out of the parking area. There was traffic to our left: a brand spanking new Boeing 737 being towed SLOWLY back toward the Boeing hangar in all of its unpainted glory. By slowly, I mean walking pace. This taxi would have taken 45 or 50 minutes, so we had to call off that flight, as well. We re-booked for Monday: 5 to 9 PM. 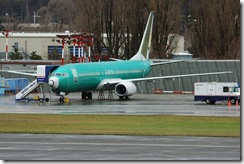 Monday (yesterday) finally came around, and my study work for Sunday night was to read up on how to use the VOR system for navigation, rather than use the primarily visual navigation we were previously planning. VORs are directional beacons that let a flight instrument determine the direction from the VOR ground station to your airplane. To find a specific point, you generally use two VORs at the same time to triangulate your position.

The flight was intense. It was 2.8 hours in the air and reviewed:

I was recording this on my GPS, so here are some highlights. First, the Thun Field landings: 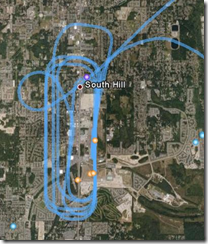 Then, some ground-reference maneuvres: 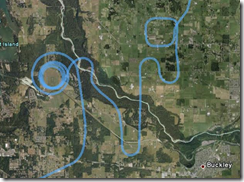 On the way back to Renton airport, we also did 30 minutes of Instrument Training. For instrument training, you don a mask that prevents you from seeing outside the cockpit, and maneuver the airplane by instruments alone.

When we finally landed back at Renton airport, we practiced another 2 landings, finally coming to a full stop at the tie-down area. My instructor got out, wished me luck, and watched as went through the pre-flight checklist again. I alerted the tower as I prepared to taxi:

I was given clearance to taxi to runway 15 (150 degrees, roughly north to south,) and prepared for my first flight. I waited for a minute as a few other planes landed, and then was given clearance for takeoff. I had too much power on my first run around the traffic pattern, so ended up lining up with the runway a little too high. Rather than try to rescue the landing in a potentially nervous state, I let the tower know I was doing a go-around, and climbed back to the traffic pattern. The controller mentioned that the winds were fairly variable and gusty, approaching 8 knots at times. She offered the south to north landing on runway 33, which I declined (as the winds weren’t affecting my landings.) The second attempt was much better, marking my first landing as Pilot in Command.

Take-off is usually a breeze, but the nose appeared unusually high as I gave the plane full power on the ground. I quickly brought the power down, and exited one of the taxiways to determine the cause. After checking everything (flaps, elevator, etc,) I realized it was just a mind trick: I had been in a basically nose-down attitude (for the descents) for the last 10 or 15 minutes, so it was a lot like Velocitization in a car. You get so used to something (speed in a car, or nose angle in an airplane,) that it becomes your mind’s new definition of normal. You combat velocitization once you realize you have it, so I requested clearance to taxi back on the runway and complete my landings.

In the air again, the controller mentioned that they were just about to close, and asked if I wanted her to stay on. I didn’t want to keep her late, so I let her know I’d make my next landing a full-stop. She was awesome, and said she had no problem staying so I could get the solo done, so I continued with my next landing – still OK, but with definite room for improvement.

My final takeoff is where it really kicked in. After lifting into the air, an enormous thrill washed over me as I took a relaxed breath of fresh air. It was physically impossible for me to NOT land a third time. I grinned as I made my final approach, and settled in for the smoothest and straightest landing yet.

As recorded by my GPS: 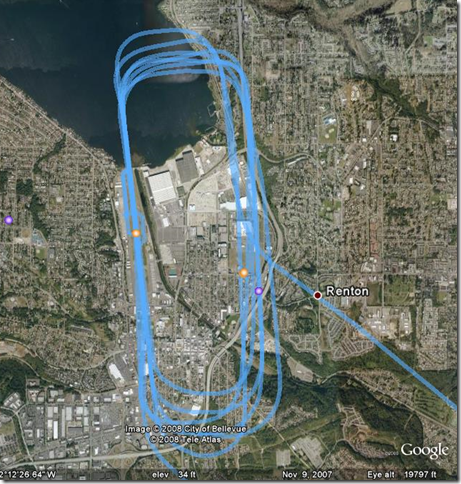 As I taxied off the runway, the tower controller congratulated me on my landings as I thanked her for her help. The landings were nothing for the highlight reels, of course, but it gave a satisfying end-cap to 30 minutes that I will never forget.

And the ripped shirt to prove it? Well, in-line with tradition, my instructor cut up the back of my shirt. Before modern electronics, in-cockpit communication was mainly through shirt tugging and hollers from the instructor that sat behind you. Cutting off the back of the shirt symbolizes this very important step – as your instructor won’t need to be yanking on it any more.