After what seems like an eternity, I finally got to start my official flight training. As a Canadian (AKA “Alien,") applying for flight school also means getting your fingerprints taken and being put in a special registration system. My training permission cleared late last week, so I booked my first lessons as soon as I could. In fact, for a government agency, the flight registration process was surprisingly efficient. Finding a place to get TSA-approved fingerprints outside of work hours? Well, that’s a different story.

One of the things I really missed about my intro flights was a good understanding of exactly where I traveled during the flight. I remembered some landmarks, but didn’t really catch on to many streets or things I knew from my ground travels. Recording my tracks through a GPS system seemed to be the best approach, so I finally settled on a Lowrance Airmap 2000C. Its features rival most of the top-end aircraft GPS products (aside from XM weather and traffic, which I’m not in the market for,) at a fraction of the price. For about the same cost, I would have been able to use some computer-based GPS software on my Tablet PC, but messing around with a Tablet PC in the cockpit seems to be a lot more trouble than it’s worth. 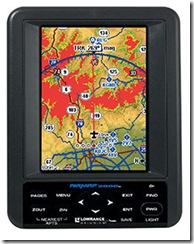 I took it on a long camping trip during the Memorial Day long weekend, and it was fun watching it trace my path around the Puget Sound. It warned me plenty as I passed through the restricted airspaces (McChord airforce base, SeaTac airport, etc,) so luckily I wasn’t actually flying.

On Thursday, I went for my first real lesson, flying AcuWings' Piper Warrior PA28-151. This is the kind of plane I want to do most of my training on – as the Cirrus SR20 (while newer and nicer) felt like it might prevent me from learning some of the subtle basics – like rudder control, or use of the nose-wheel while on the ground.

In the introductory flights, the instructor does almost all of the ground work, aside from giving you a brief overview of what they are doing. For your first training flight, though, you start to take over the technical preparations: aircraft examination, engine start procedures, pre-takeoff work, and the post-flight run-down. We spent about 45 minutes on these preparations, learning the how and why behind 80+ items in the pre-flight and post-flight checklists.

In the air, we practiced straight and level flight, ascents, descents, and (level, ascending, descending) turns. Like the flight-preparation work, non-introductory training means that you begin to take over much more of the landing preparations. During this flight, we did 2 landings, one being a touch-and-go. For both, I flew the traffic pattern, lined up the approach, and helped guide us toward the runway. I did a little less of the actual landing than I had done during my introductory flights, but I think that was probably because of higher wind. This flight gave me 0.8 hours of qualified dual-instruction to apply to my flight training.

On Sunday, we put in another 1.1 hours of dual instruction, with the learning curve continuing just as steep. Since I had been taught the checklists, pre-flight this time was all my own – including the inevitable splashing of leaded, high-octane Avgas on my hands while testing for fuel contaminants. As we prepared for takeoff, I was shown how to talk with the tower, request permission to taxi, take-off, and practice landings. That’s a massive system of verbal cryptography that will take a while to get used to, but you feel like part of a club when you’re doing it.

While in the air, we practiced slow flight (near-stall conditions,) stalls, and recovering from stalls. These are the most common “emergency” situations in flight, and are relatively easy to recover from as long as you know what you are doing. If you haven’t practiced them, then you’ll just panic and donate some iron to the earth’s mantle.

After practicing those, we started working on landings. As a skill in flying, landings are a unique breed. They are a skill within a skill: a technique that gets lavish attention in the context of flying, but completely independent of it. Pilots obsess about landings the same way that cigar aficionados gush about about the tower of ash emanating from their cigar, or how developers delight in “Perl Golf.”