In 1799, Napoleon’s explorers discovered a 4-foot tall, 700 lb stone slab in Rosetta (Rashid), Egypt. It was carved with three sections of writing. Two were well known to archaeologists: Demotic script, and ancient Greek (Coptic). The most interesting part - the hieroglyphic symbols - were also very well known to the scientific community. But they were also a great mystery. All attempts to decipher hieroglyphic text had so far been unsuccessful. 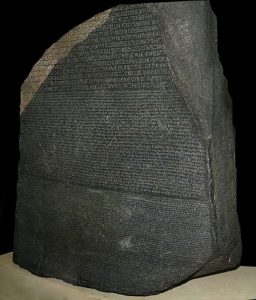 The discovery of this stone, which we now call the Rosetta Stone, began to unravel the great mystery of Egyptian Hieroglyphs. Nearly immediately, scholars realized that these three sections of writing represented three translations of the exact same passage: a relatively uneventful proclamation of policy and tax changes under King Ptolemy V. Using the more well-known Coptic and Demotic sections as guides, they initially translated phonetic portions of the hieroglyphs. Then, over the next 20 years, they continued to use the Greek and Demotic sections to gradually expand their understanding and translation of the hieroglyphic inscription.