I am extremely excited to announce that the 4th edition of the PowerShell Cookbook is now available! 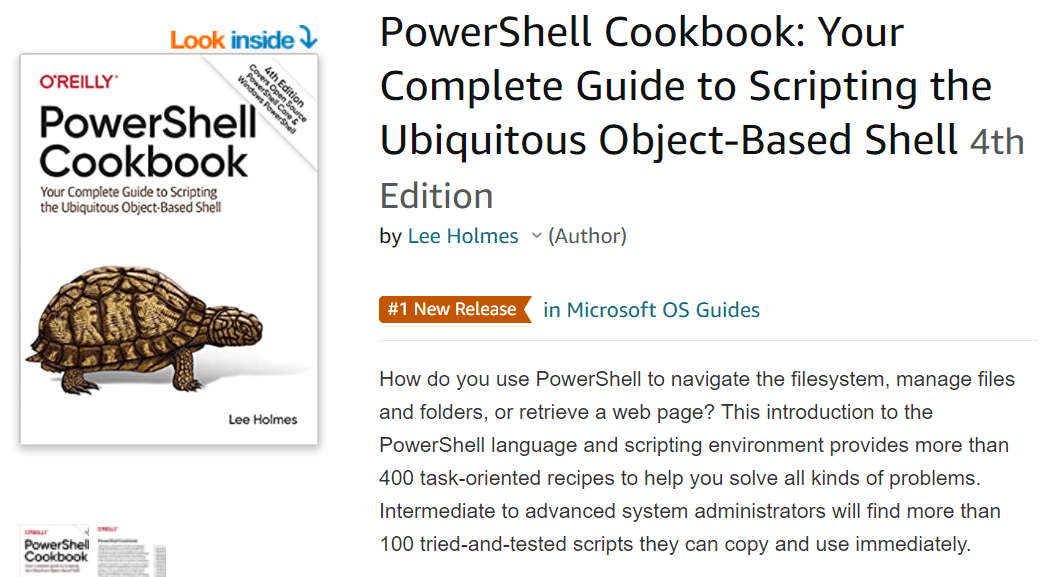 Now in its 4th edition, the PowerShell Cookbook is now available from Amazon and other major retailers.

The 1st edition of the PowerShell Cookbook came out in 2007 - nearly 14 years ago! It had the single goal of making you immediately effective with PowerShell. While the Cookbook of course dives deep into all PowerShell’s most important cmdlets and language features, it teaches you in the context of accomplishing real-world tasks. And along the way, it also includes pre-baked scripts to solve major scenarios that PowerShell doesn’t quite solve out of the box.

As time went on and PowerShell improved, many of the Cookbook’s contributions made it into PowerShell itself: the clipboard cmdlets, Format-Hex, simplified syntaxes for Where-Object and Foreach-Object, Add-Type, and tons more.

The 4th edition of the Cookbook continues this torrid pace: over 1,000 pages of heavy-hitting content despite me trying to trim it to the bare minimum each edition. This edition adds major coverage for Security, Debugging, Visual Studio Code, Linux, and new language features. It also removes content that is deprecated and no longer relevant, such as Workflows. For perspective, I have removed more content from editions of the Cookbook than most books ever had to start with :)

What’s new in this edition?

The PowerShell Cookbook is written in a text-based format called AsciiDoc, which is similar to Markdown. So one of the cool things I get to do is use PowerShell to perform bulk edits, content searches, and similar. It’s all checked into a Git repository, so I can also use PowerShell to analyze the commit logs. Here are some of the major topics that have been added in this edition: 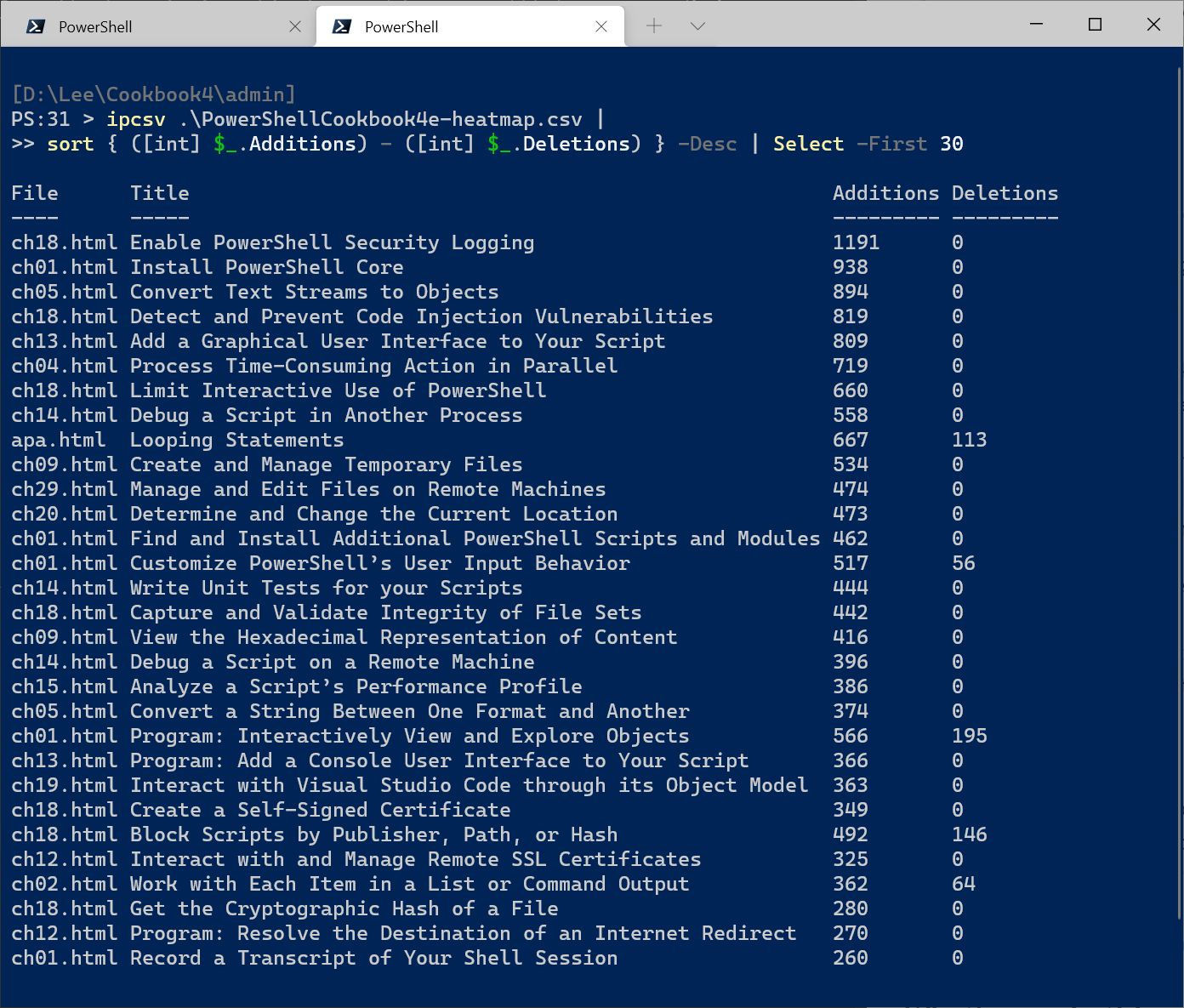 And here are some of the major topics that have been removed: 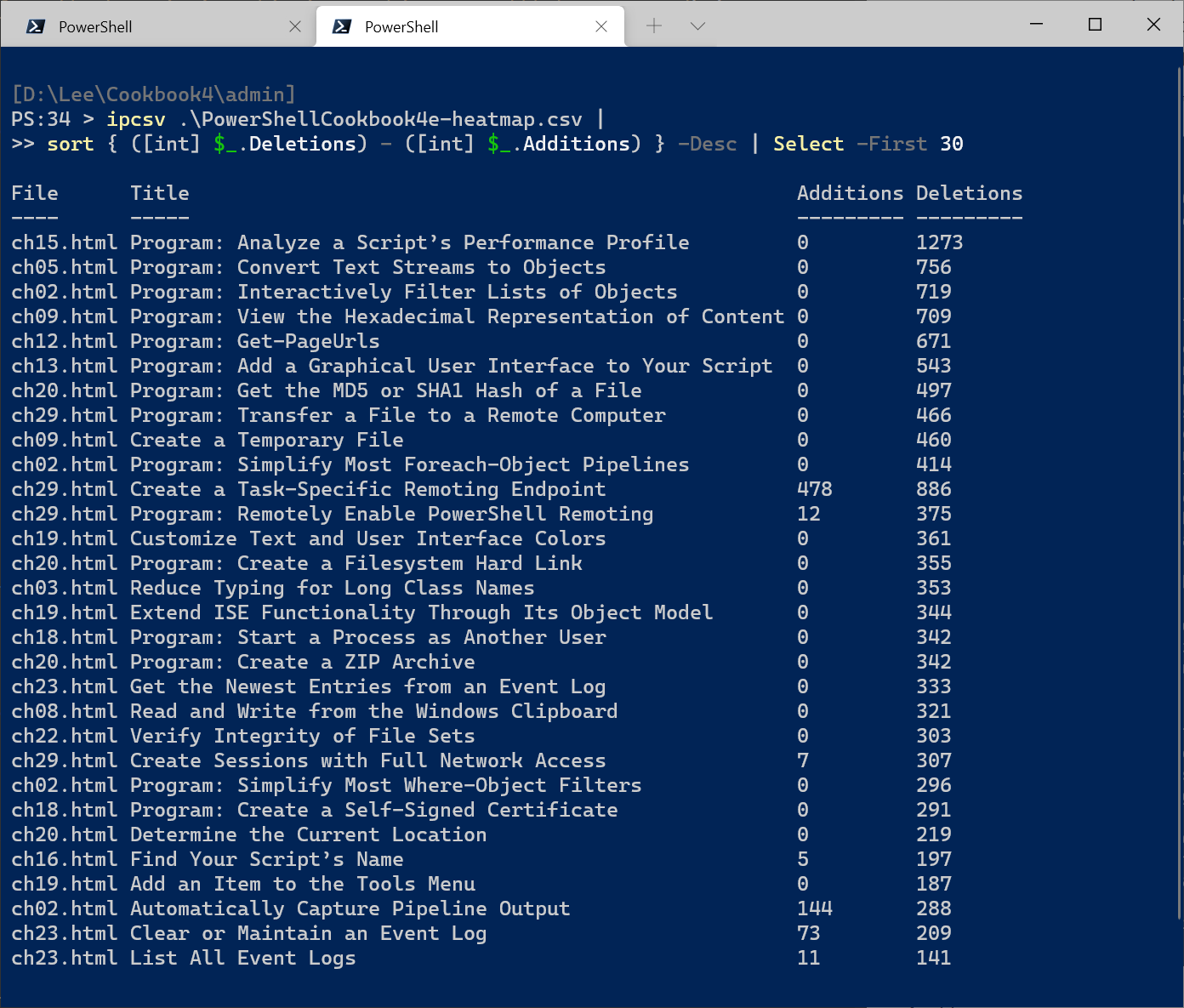 As you can see, there’s been a tremendous amount of work to ensure that this is the most comprehensive, up-to-date PowerShell reference you could ever hope for.

This has been a very popular resource, so we will be continuing with it permanently. If you have purchased either the physical or e-book version of the Cookbook, you have perpetual free online access to https://www.powershellcookbook.com.