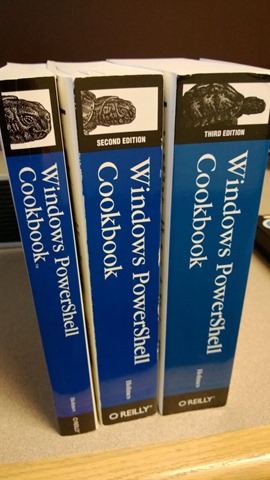 You can buy it in both print and digital formats from Amazon, O’Reilly, and any of your other favourite book sellers.

If you or your company subscribes to Safari, it’s there too.

If you want a free eBook of the first chapter, O’Reilly has made it available: “The Windows PowerShell Interactive Shell.”

What’s new in this edition?

My previous post delved into this in tons of detail.

Workflow, being the biggest new addition to PowerShell in version three, represents the largest change to the cookbook in this edition. It gets an entire chapter of coverage – including some great guidance on when to write a workflow, and when not to!

Scheduled tasks get explained in detail, as do web and internet scripting techniques that we’ve now vastly simplified through Invoke-WebRequest, Invoke-RestMethod, and related cmdlets.

PowerShell version three also begins a large shift in the Windows Management world: from WMI to CIM. The Windows Server Blog talks about this shift in great detail, and the PowerShell Cookbook has been completely updated to incorporate this change.

If you liked the first or second versions of the PowerShell Cookbook, you’ll like this one even more :)