I got a Lenovo IdeaPad Yoga just under three weeks ago. Now that I’ve had some time to put it through its paces, I thought it would make sense to post a quick update on how it’s going. In short: it’s going great, and I would buy it again if it were to disappear today :)

If you’ve been drooling over the Yoga on the online store, the version you get at Best Buy isn’t any of the three you see on the Lenovo site. It’s like the base level one, but upgraded to an Core i5 instead of an i3.

To save power (on a Balanced power plan), Windows automatically scales the CPU to the task at hand. When you’re not using CPU-intensive applications, the processors get tuned down to about 0.85 GHz. I never thought I’d use the word “MHz” when referring to CPU speed again, but it’s true. 1 core running at 850 MHZ at rest or with mild use (like editing this blog post). At high load, you get the full 2 cores at 1.7 GHZ working for you. 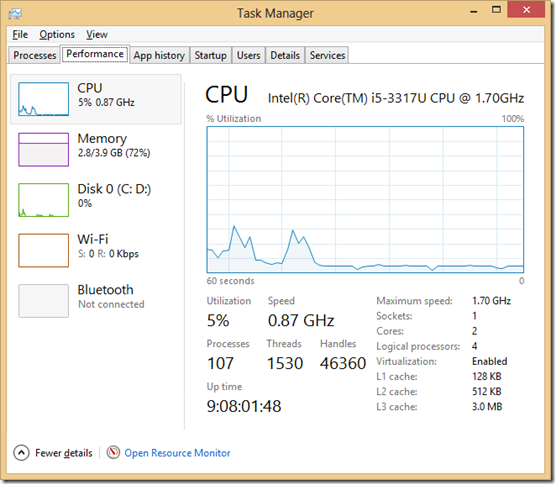 As a result of these power-saving measures, battery life is stated at about 7 hours. While I haven’t measured it exactly, this seems about right for casual usage.

It comes with 4GB of RAM, which is user-replaceable – for $33, you can switch the installed 4GB to 8GB.

The wireless adapter is the “new standard” B/G/N. It doesn’t seem to be able to fully leverage dual-band routers, but then again nothing much can at this point.

Physically, the Yoga is pretty nice, but not awe-inducing. The palm rest / keyboard casing is a nice stippled kind of rubbery plastic. Online sites are calling it “leather”, but it’s definitely not. It came with a few stickers below the arrow keys and on the bottom side of the laptop. Most of them came off easily with no sticky mess or residue, but one Windows sticker had some bits I had to use my nails to scrape off a little bit.

I’ve got the silver Yoga – the forthcoming orange ones might look a bit snappier.

Hardware – as a convertible / tablet

The convertible hardware is the primary reason I got the IdeaPad Yoga. I wanted something that I could use like a laptop, but that still offered an experience where I could get the keyboard out of the way. I’ve seen people wrestle with devices where the keyboard detaches completely as the means of “getting out of the way”, and you end up feeling like you’re always carrying around crappy extra pieces of hardware. This desire for a laptop / tablet middle-ground is common, hence the new category of “hybrid” laptops that the Yoga plays so delightfully in.

The screen’s unique 360 degree folding feature is much better than I thought it would be. Folded completely around, it’s a neat “tablet-like” experience. It works great for fully immersive apps, and apps where you’re actively poking / swiping at things. In this tablet mode, though, it’s absolutely not in the category of a Surface or iPad. For example, I find my iPad too heavy to be a comfortable e-reader device. Holding it with one hand for an extended amount of time just stops being comfortable. The Yoga is heavier still, making it only reasonable for situations or apps where it can be supported by a lap, arm, two hands, etc.

When it’s in tablet mode, the first thing you notice is that you can feel the keys pressing and moving on the back side when you hold it. I don’t worry that it will cause any damage, bit it’s a little distracting at first. Then you get over it and move on with your life.

That said, open the screen / keyboard by 30-40 degrees while it’s on your lap, and you’ve got a situation even better than a tablet: stand mode. 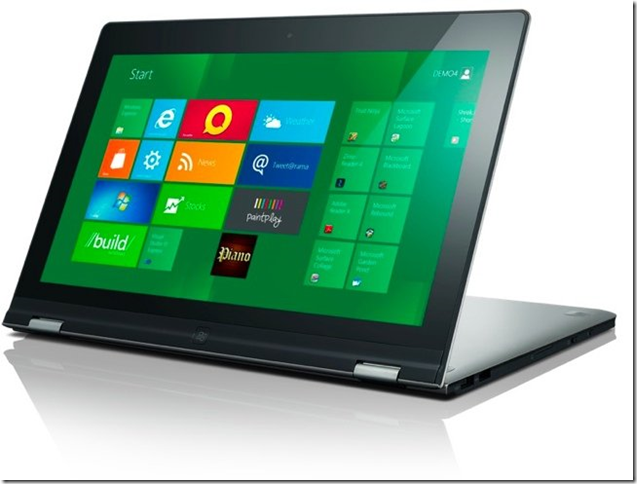 Perfectly oriented at your face, and no-handed operation. Casual games feel so much more casual when you don’t need to hold the screen to a certain viewing angle. Web browsing feels so much more care free and relaxing when you only need to touch the Yoga to navigate or scroll.

I use the “tent mode” once in a while when horizontal space is at a premium (i.e.: for showing a recipe in the kitchen), but stand mode really takes the cake for me.

Hardware – as a laptop

As a laptop, the Yoga itself feels very thin and light. Not crazy razor thin and light, but it’s the kind of thing that you can pick up with one hand, hold by a corner, and not worry about dropping. My MacBook Pro now feels like an overweight monster in comparison. You don’t really notice it when it’s on your lap, and CPU-intensive apps don’t result in a third-degree burn to your legs. 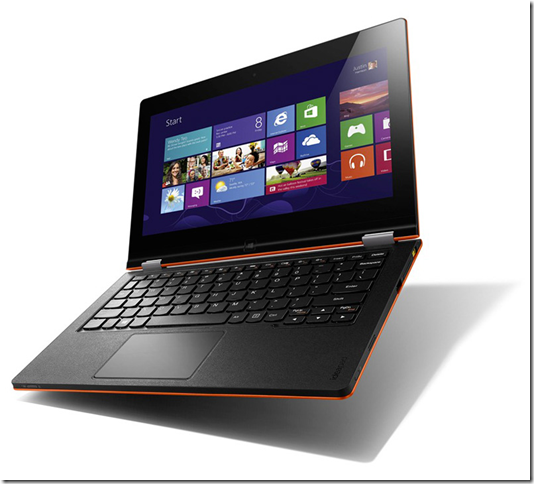 The fan is extremely quiet when it is on, which is rarely.

The keys are laid out pretty well. The home / end /page-up / page-down buttons are a little awkward (they are in a column on the right hand side), but I suspect I’ll get used to them.

Given that it’s a Windows 8 laptop, its support for touch really changes the way you interact with computers. If you’ve only used Windows 8 with a keyboard and mouse, a whole new world of surprising efficiency awaits. And it’s delicious. Of course, the Yoga supports (and requires) touch in its other three modes (tablet, tent, stand), but it’s a huge unexpected improvement to a traditional touchless laptop.

The Yoga comes with crapware, but not much. It comes with a few useless modern applications, and a few useless desktop applications. For example, a lame PDF reader that tries to get you to upgrade to a pro version, and the option to install anti-virus. Nothing was difficult to uninstall, and it didn’t take much effort to get the laptop “clean” again.

The biggest surprise / problem with the Yoga initially came from its (poorly-performing) touch response. After fixing that, there have been no issues.

As for its competition, here were the other ones I looked at (and some thoughts about them):